Back in March we talked about Adobe’s Project VoCo which could recreate someone’s speech with only twenty minutes of recorded dialogue.  Now just a few months later, Lyrebird claims it can recreate any voice with just one minute of recorded speech!  Lyrebird also says it can make that speech have any intonation or emotion, from sadness to anger. 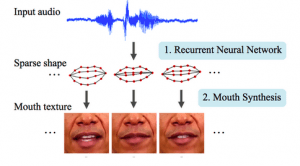 As far as synthesizing video, students at the University of Washington have now been able to use video manipulation to create a realistic looking lip-synched video of former President Obama speaking.  They used audio from previous clips of Obama, then trained a neural network on hours of his televised speeches.  From this they were then able to load any audio and make the video appear like it was recorded in real-life.  If you’re interested in more of the science behind this, check out their paper on the process.

Coupling Lyrebird with video synthetization could easily put any words into someone’s mouth, and have convincing video evidence of them saying it.  Not only could this affect evidence presented in court cases, but could easily be used for impersonation in fraud and identity theft.  Besides being able to recreate someone’s voice in a convincing vishing attack, imagine if fraud began happening over Skype or another video chat.  All it would take is creating the video, linking to the victim, then authorizing a large wire transfer or setting up password changes on systems.

Scientists have started using Virtual Reality and Artificial Intelligence to help treat Post-traumatic stress disorder (PTSD) in soldiers returning from war zones.  One of the options is a synthesized therapist that “meets” with a patient to discuss the PTSD, and other therapies immerse the veteran in simulated combat situations they were involved in.  While still in the early years, studies are showing  70% or greater success rates with remission of PTSD.  Not only could this provide easy access to veterans in need, but this could also lead to people getting needed therapies quickly while on deployment.  In the end, we just need to be mindful of the negative possibilities; while embracing all of the good results from this new tech.