The Zeus Trojan was bad enough, but the attackers have not stopped their efforts there.  Today there are reports of a new variant of that trojan called – ‘Citadel’.

The Citadel is a chimera of the Zeus trojan, ransomware, scareware and social-networking.  This trojan is especially malicious.  It offers itself up on a drive-by site where it is downloaded to the victim’s computer.

After it installs on the sly it then sends signal to download and install the ransomware called Reveton.  This then freezes the victim’s computer and offers a very legitimate looking pop up: 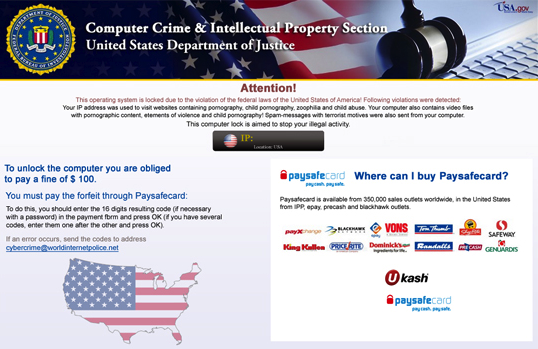 This pop-up is part of the scareware and ransomware piece.  It tells the victim that child pornography has been found on their computer.  It logs their IP address and threatens to report this to the proper authorities unless they pay a “fine”.  A mere $100 seems small compared to a jail sentence, job loss and being labelled as a pedophile, no?

I honestly wish I could say it stops there. But then the creators of this particularly evil trojan use a brand of social-networking connections to communication with the infected machines and steal banking details or other personal information to further the attacks.

What Can We Learn?

Besides the fact that malicious attackers are becoming more evil and caring less and less for their fellow man, there are some serious social engineering aspects at play here.

For the other 33%, the fear of being reported to a government agency is still legitimate.   John Floyd, a famous attorney who fights for the rights of the wrongly accused, tells stories of those who spent decades in prison for false accusations.  These stories flood the Internet, again, causing many to fear, even if they are innocent, that they can be incarcerated.

This fear makes people rationalize paying the “fine”.   Dr. Gregory Berns from Emory University conducted a study that basically states “dread and fear cause us to make awful decisions”.  This is the psychological principle that these attackers play off of.  The fear of being caught, the fear of the false accusation, the fear of your computer being damaged or unusable.

What can you do if you feel you are infected?

If you are affected by this trojan, you may need to perform the following instructions to manually remove it:

Until next time, stay safe.