Our guest Aaron Delwiche is a TED speaker and a college professor that focuses on the use of propaganda. His site is devoted to understanding how it works. Release Date May 19 2011

You can download it direct: Social Engineering For the Masses Podcast 22

Check out the Exploit DB.

The Team at Social Engineer is very appreciative of all the support we get from Offensive Security. We have a new live training schedule on the website sign up now before the class fills up.

This episode is sponsored by Spy Associates.

Thank you to the EFF which continually supports and helps us.

We want to take the time to also say a special thank you to two sponsors that are helping the Defcon 19 Social Engineering CTF come to life: Core Security and Qualys

We are putting a call out there for any who want to submit an idea or your story for the Social-Engineer.Org Newsletter. Check out the Newsletter page for more info, or check out the archives at that page. Email us at [email protected] with your submission or idea.

Offsec is now sending out people to do a series of speeches. If your organization is interested email Chris at chris [email protected] offsec.com DerbyCon tickets are probably close to being sold out.  If you don’t have your ticket yet – GET ONE. 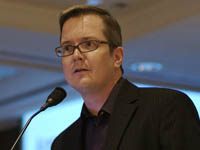 We will be interviewing Aaron Delwiche.  Aaron is a TED speaker as well as a college professor that focuses on the use of propaganda.  His whole site is devoted to understanding how propaganda works.  Aaron is an Associate Professor in the Department of Communication at Trinity University, Aaron teaches courses on hacking subcultures, transmedia storytelling video-game design and criticism. His award-winning experiments with games in the classroom have been covered by international publications ranging from Wired to The Guardian (UK). In 2009, he received a grant from the Lennox Foundation in support of the seminar series “Reality Hackers: The Next Wave of Media Revolutionaries.” and published an anthology of essays related to the series. He is also the co-editor, with Jennifer Henderson, of the forthcoming Routledge Handbook of Participatory Cultures. We talk to Aaron about these amazing topics:

The Engineering of Consent by Edward L. Bernays/Howard Walden Cutler
The Participatory Cultures Handbook by Aaron Delwiche/Jennifer Jacobs Henderson
Propaganda: The Formation of Men’s Attitudes by Jacques Ellul
Coercion: Why We Listen to What “They” Say by Douglas Rushkoff