As a parent of an 11-year-old boy, I always wonder what he’s going to get himself into. (usually after reflecting on what I did when I was younger) I didn’t want him not to use technology, so I started him off with an iPod then when I got a new iPad, I gave him my old one. At first it was just for playing games and some music he liked, and he watched a few videos that we downloaded for him. Then he was introduced to videos on YouTube through family and friends. He started getting curious and found some Lego building sites. Then he got interested in Minecraft and started watching videos of people playing it. All along I put parental controls on the devices and would always monitor what he was watching. I also explained to him that he is to be careful watching content with bad language and to turn the video off if he hears any (so far, he’s been good about that). We would let him bring his tablet with him when he went out or when we traveled and somehow, he always found a way to grab an internet connection. When he was 10 years old he was finding a connection and sometimes guessing passwords to get connected. He at one point said to me that he’s a hacker like his uncle. I then realized it was time to talk to him about what is wrong with breaking into someone else’s network. Since then, he has always come to me asking if it’s okay to connect. 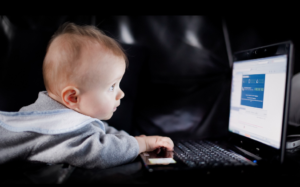 Why am I telling this to you? Because when you read stories like this report from SCMagazine on “10-year-olds break safety rules set by parents to hide cyber-lives”, everyone is going to have to consider that their kids may be doing something questionable, such as trying to bypass the controls put in place to protect them.

What can we as parents do? David Emm, who is quoted in that SCMagazine article, says it well; “At 10, many children appear mature and confident enough to handle internet-enabled devices, but parents seem to overlook their impulsive and often naïve nature. For young people exploring, experimenting and taking their first steps online today, it’s vital parents take an active role to mentor them, discussing the risks, threats and dangers to define what constitutes safe, responsible behavior online,”. Yes, as parents we need to take an active role in mentoring our children, discussing the risks, threats and dangers that lie on the internet and what can happen if they cross the ethical and legal line. Set boundaries and restrictions but explain why you are doing so.

What about when they get older and it’s not just about going over a friend’s house to watch something we don’t want them to or playing a game we restricted them from playing? What if its’s like this 17-year-old teen that found a vulnerability using a “hacking tool” on TalkTalk’s website and then posted it online, as reported in the article on Dumbarton and Vale of Leven Reporter’s site? What can we as parents do then? How can we even tell if our teen is heading down that road?

Infoworld’s Roger A. Grimes, lists 11 signs to look for and gives some advice on what to do. Some that stood out to me that we should watch out for:

One thing these all have in common is that they require us as parents to have an active role with our children. We need to know what are children are doing. If they do have multiple social media accounts find out why, especially if they don’t want to share them. Always know what they are doing on their computer and why they are doing what they are doing. Not all hacking is bad, so don’t assume the worst at first.

What if you find out that your child is participating in some unethical or illegal hacking activity, perhaps hacking websites, what can you do?

Ground them for life.

No, the better thing to do is to guide the child. Let them know that it is good to develop hacking skills, but to do it in a way that isn’t illegal. Help them learn the importance of ethics. They need to know that what they are doing can lead to their arrest. If this were to happen, it will follow them around for the rest of their lives. All of us in the security industry know of someone that this has happened to; they can be restricted on where they can travel or what jobs they can get.

Inform them that you will me monitoring their online activities and if caught doing anything illegal there will be consequences. (Note: very important to follow up if they do break the rules) It would be good to setup the computer they can use in the main area of the house where it’s easier to monitor.

Since we want to encourage good behavior, show them websites that permit and encourage hacking. Like https://www.hackthissite.org/, https://hackerlists.com/hacking-sites/, and others. Encourage them to get involved in ethical hacking contests, conferences and cyber boot camps, such as:

If your child loves hacking there are so many avenues to do it ethically and legally. Stay active and involved with your child. Show them that Ethical Hacking skills can lead to a promising career and a well-paying one as well, without having to go to the dark-side. Then your child will acquire skills without any regrets.