A con man is  a person who swindles or misleads his victims through the use of a confidence game. A con man knows that it’s human nature to want to trust other individuals. So, a con man manipulates this natural desire to trust others for their own personal gain. In fact, most historically infamous con men are known for their exploits involving money. Indeed, money seems to be a common thread with the vast majority of con men.

The FBI website breaks down some of the common types of scams. The following list is an example of a some of the genres of confidence scams, as well as some people that became notorious for applying them.

According to the U.S. Securities and Exchange Commissions, in the classic “pyramid” scheme, participants attempt to make money solely by recruiting new participants into the program. The hallmark of these schemes is the promise of sky-high returns in a short period of time for doing nothing other than handing over your money and getting others to do the same. 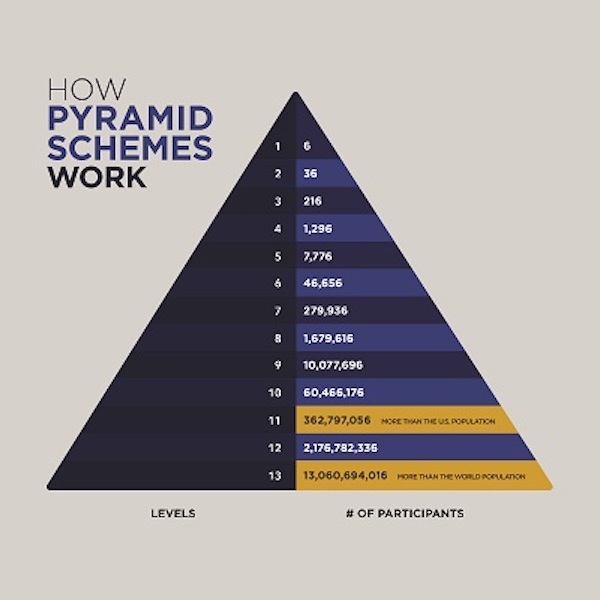 Image: US Security and Exchange Commissions

The con man, Charles Ponzi, provides an example of a pyramid scheme and how devastating it can be. This article published on the Solutions Risque Website discusses how Charles Ponzi affected US History with his con. For example, most people now refer to a pyramid scheme as a “Ponzi Scheme”. Signifantly, Ponzi promised his early investors an almost unbelievable 50% return on their investments. In reality, Ponzi took money from new clients to pay back the originals. Ponzi was actually able to pay back the returns for his early tier customers but was not able to pay his new clients back.

Bernard Madoff, another con man, became infamous for scamming millions of dollars from thousands of his customers, friends and relatives. He used and improved on Ponzis’ model to generate huge investment returns for his early clients while bringing in new money from new clients. In fact, Madoff was essentially “Stealing from Peter and paying Paul”. An analysis and commentary on Bernie Madoff’s sophisticated Ponzi scheme can be found in this article published April 20, 2017 from the CFA Institute. 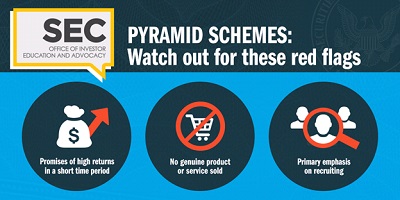 Image: US Security and Exchange Commissions

According to the U.S. Securities and Exchange Commissions, one type of advance fee fraud  is known as a Nigerian “Advance Fee Fraud.”  For instance, in these schemes someone pretending to be a Nigerian official or business-person asks ordinary individuals and companies to help move millions of dollars out of Nigeria in exchange for high, hassle-free profits. The fraudsters solicit investors through mass mailings, faxes, phone calls, and e-mails.

More information about this type of scam can be found at Scamwatch.gov.

Merriam Webster’s defines identity theft as: “the illegal use of someone else’s personal information (as a Social Security number) especially in order to obtain money or credit .”  It indicates unlawful activities that use the identity of another person or of a non-existing person as a target or principal tool.

Frank Abagnale aka “Catch Me If You Can”

Frank Abagnale’s exploits as a con man were documented in the film “Catch Me If You Can”. Not only was he famous for check fraud, Abagnale was a very convincing identity fraudster. His most famous exploits revolved around his pilot persona which he used to not only cash hundreds of fake checks, but he was also able to travel the world for free.

Christian Karl Gerhartsreiter is best known for claiming that he was a long lost heir to the Rockefeller fortune. Mr. Gerhartsreiter who spent much of his life as an imposter was convicted of murder in 2013 and in fact is now a resident of California’s San Quentin Prison. This link is an interview with Clark Rockefeller on the ABC NEWS website with an audio clip.

Indiana Man Sentenced to More Than 13 Years for Impersonating Psychiatrist

A false reward scam consists of a con man convincing a mark that he has an item in his/her possession worth more money than the actual value, or has won a prize that does not exist.

Victor Lustig aka “The Man Who Sold the Eiffel Tower”

Victor Lustig is known as the “Man who sold the Eiffel Tower”. Much like his American counterpart Parker, Lustig famously “sold” the Eiffel Tower to a scrap metal dealer in France. He is also famous for scamming Al Capone. Lustig “convinced” Al Capone to invest $50,000 with him. He stored the money in a vault and returned it two months later, stating that the deal had fallen through. Capone, so impressed by Lustig’s honesty gave him $5,000 for his effort.

More information about Victor Lustig aka, “The Man Who Sold the Eiffel Tower” can be found in this Smithsonian.com article.

George Parker  was famous for scamming tourists into buying famous landmarks, usually in New York City. He was fond of selling the Brooklyn Bridge.

Kevin Trudeau is a modern day snake oil salesmen. Indeed, he has been sued many times by the Federal Trade Commission for false advertising and other television sales fraud campaigns. Although he has been sued repeatedly, and is banned from selling certain items via TV, he is legally allowed to sell his books. In 2016, The U.S. Supreme Court rejected Mr. Trudeau’s bid to have his 2013 criminal contempt conviction overturned. He is currently serving his 10 year sentence at the Federal Prison Camp Montgomery in Alabama. In spite of his conviction, Mr. Trudeau maintains an active Facebook page, where he actively  solicits donations for his “defense fund.”  He also compares his imprisonment to that of Nelson Mandela.

The FTC in the USA has printed a wonderful page with lots of tips and information as well as a video on Telemarketing Fraud.

Harvey and Tye Sloniker operated a massive telemarketing business in Arizona during the early 2000’s. They used teams of telemarketers to sell fake, low interest credit cards and other services such as, fake identity theft protection policies. They were permanently banned from telemarketing by the Federal Trade Commission in 2003 and fined $525,000 USD.

For a list of other types of confidence scams and tricks see here and here.